The Nine Virtues of Sanga 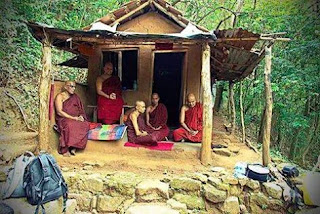 The eight kinds of noble ones are collectively known as the Sangha. The non-ariya ones (Sammuti Sangha) who have the same view and the same moral practice as the noble ones (Ariya Sangha) are also included in the Sangha. The Sangha being endowed with nine supreme attributes, should be highly honored and venerated. Sanga community has the nine qualities as follows:

(1) Supatipanno Bhagavato Savakasangho – The disciples of the Blessed One practice well the threefold training of morality, concentration and wisdom,

(4) Samichipatipanno Bhagavato Savakasangho – The disciples of the Blessed One practice to be worthy of veneration,

(5) Ahuneyyo – being worthy of receiving offerings brought even from afar,

(6) Pahuneyyo -Being worthy of receiving offerings specially set aside for guests,

(7) Dakkhineyyo – being worthy of receiving offerings offered with the belief that the offering will bear fruits in future existences,

(9) Anuttaram Punnakkhettam Lokassa – being an unsurpassed (incomparable) fertile field for planting the seeds of merit in the world.

The Benefits of Reflecting upon Qualities of the Sangha:

As long as someone reflects upon qualities of the Sangha, his mind is invaded neither by greed, nor by anger, nor by delusion. He has a right state of mind being inspired by the Sangha. And when he has suppressed the hindrances, the Jhana-factors arise in a single mind-moment. Furthermore, when a person reflects upon qualities of the Sangha, he is respectful and deferential towards the Sangha. He attains faithfulness and has much happiness and gladness. He also overcomes fear and dread. He is able to bear pain and comes to feel as if he were living in the Sangha’s presence. The body of who dwells in the reflection of Sangha’s qualities becomes as worthy of veneration as Uposatha house (a chapter house) where the Sangha assembles. When he encounters an opportunity for wrong-doing, he has a strong awareness of conscience and shame as if he were in the presence of the Sangha. If he comprehends no higher, he will be at least born in a happy state.

May all beings be well & happy and attains the fruit of Nibbana.